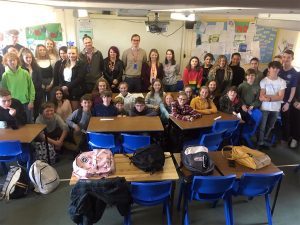 The Geography department were lucky enough to host some of the staff from the Natural History Museum (NHM) for a two hour question and answer session with over 50 students from Year 7 to Year 12. They were in Lyme Regis as part of the Fossil Festival and had agreed to be questioned by some of our students. Topics ranged from discussing fossils in Lyme Bay, identifying the colour of dinosaurs to discussing the Megalodon, the biggest shark ever to have lived. Students were also able to ask questions on the future value of ores and metals as well as how one becomes a scientist.

As well as these topics, climate change and extinctions were also a key part of the discussion. With the actions of Extinction Rebellion in the news along with the recently released report by the UN on the impact of species extinctions, climate change is very much on the students’ minds and who better to discuss it with than scientists from the NHM? The good news is that climate change and increasing CO2 levels will not “damage” the planet. However, the impact on humans and how we live our lives is very significant and therefore any action to reduce our emissions is worthwhile!

A big thank you to Emma Bernard for agreeing to bring staff from the NHM to be questioned by our students.