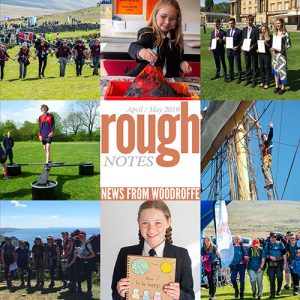 What can you say about Richard apart from that he was a brilliant and inspirational Head Teacher.

I first came to the school 12 years ago as Assistant Headteacher and one of the reasons I wanted to work at Woodroffe was Richard’s focus on teaching and learning. This set Woodroffe apart from so many other schools, which are constantly setting unrealistic targets for all students and teachers. This focus that Richard had ensured that Woodroffe reached the cutting edge of educational research and all the teachers are still involved in looking at how they can teach differently so that the students learn better. The results are obvious for everyone to see as, under his leadership, the school has achieved some of the best results for the students, in the county and beyond.

Richard always looked for the next opportunity that would make Woodroffe even better. This included becoming a Teaching School and a Maths Hub and introducing Latin, Mandarin and Classics into the curriculum. This means that the school is able to offer so many more opportunities within the curriculum than many others, particularly as he was great at finding grants to cover these new initiatives. He always thought that it was very important that everyone, including the Headteacher, teaches, otherwise how can they lead? Richard is an outstanding teacher and would lead by example, by teaching some of the new curriculum areas he introduced. He had the knack of knowing what the next idea in education was going to be and would begin to explore these ideas, which led to Woodroffe again being able to be one step ahead of the rest. This means that the school is often used as a model of success at a national level and for a small rural school it punches well above its weight.

Woodroffe is in the outstanding position it is at the moment because of the 15 year path Richard has taken us on. He would say that he did not do this alone, but without his inspirational leadership it would not have been possible. He recruited many of the staff we now have and he only recruits the best, as that is what our students deserve.

Richard has left Woodroffe in a fantastic place, thanks to his hard work and dedication to the students. I only hope that I can be as great a Headteacher as Richard was.

I am sure that all staff, pupils and parents appreciate what he has done for the school and will wish him well for the future. No doubt in retirement he will keep himself busy with Ofsted inspections, playing saxophone with various jazz bands and hopefully finding time to relax.

Happy retirement Richard, you deserve it and will be missed.

It seems right this issue to celebrate and thank Richard Steward, who retired as head teacher at the end of April this year. Richard joined the school over 15 years ago and in that time transformed us into one of the most consistently high performing state secondary schools in the region. However, besides ensuring that standards and results rose he never lost sight of the fact that school life was more than just acquiring qualifications. As soon as Richard joined he was already hard at work securing Specialist Arts and subsequently, Specialist Maths status for the school which brought in extra resources as well as expertise so that students could develop their skills beyond the classroom. He never stopped innovating and I have never known someone more willing to embrace change when it creates opportunities for young people to enjoy learning and teachers to enjoy teaching.

I first met Richard when I was a local authority education consultant providing training for all of Dorset’s secondary head teachers. All of them were taken aback when I asked them to complete a card sort. I think they expected me to lecture them on some new approach to teaching or assessment, not Richard. He knew that as all research shows, people learn best by being active, you don’t learn much at all just listening passively. So, he happily completed the task and then proceeded to help his somewhat confused colleagues!

Subsequently, I worked as a Consultant at Woodroffe and knew from meeting both the staff and students there was something very special about the school. Of all Dorset’s heads few were as interested in improving teaching as much as Richard. So, when an opportunity arose to join the school, I immediately sent my application in. One of the most influential people I’ve worked with before Richard advised me to only move jobs when I could work with someone from which I could learn and grow as a professional. I will always treasure the 11 years of learning I’ve had from working alongside him.

As you can imagine there has never been a dull moment, from taking the seemingly crazy decision to ‘invite’ Ofsted in to inspect us in 2011, 5 days after the start of term, (which secured the outstanding grade needed for us to bid successfully to become a Teaching School and subsequently a Maths Hub), to setting up the only Lego innovation suite at one point in the South West. I’ll never forget how triumphant he was when the Lego robot he was programming drove across his office before everybody else’s did!

This is the legacy he leaves behind, we must always be curious, we must never forget to make learning active and fun, by relentlessly focusing on teaching we can make our students’ more successful and by embracing change we control our destiny rather than being led by it.

I know as a lead Ofsted inspector and educational consultant he is in great demand across the county but back at Woodroffe he will much missed.