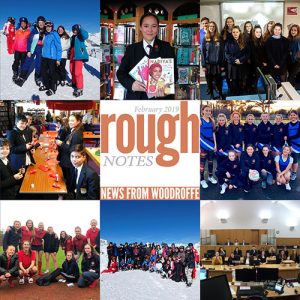 “Success is not final, failure is not fatal: it is the courage to continue that counts.” Winston Churchill

With over a 1000 students in the school we sometimes forget all the trials and tribulations they face each day just to arrive at school prepared and ready to learn. I fear sometimes the same could be said for our celebrating their successes as well.

As a school we will always be expected to focus on academic success and by those measures our students do remarkably well. A recent report in the Times newspaper placed Woodroffe as the best state school in Dorset, due in part to the fact that our GCSE students consistently make progress comparable to the best 25% of schools in the country. On some measures the progress students make is even better. In recent years we have been sent letters stating our performance in Ebacc subjects (English, Maths, Sciences, Humanities and Languages) place us in the top 100 schools across the country. Similarly, students in our Sixth Form achieve the grades which allow them to secure the places they need to go on to their University place of choice. So, by the measures of school league tables we are a very successful school.

But success, like education is surely more than just an examination grade. Looking at some of the recent extracurricular activities around the school, success can be a winning netball team or learning to ski on the recent Y10 trip, it can be achieving the Bronze Duke of Edinburgh award or performing in the choir at a Carol Concert, it might even have been winning a prize as part of our Chinese New Year Celebrations. These smaller successes need to be appreciated as well. I have been impressed to see the number of students sticking with the running club throughout the wet dinge of the winter months or going up to Maths and using a chess set to stretch their problem solving skills at lunchtimes.

In lessons I think students need to focus more on the small successes too. They need to appreciate when they make that tasty pasta sauce in Design Technology or when they write that great sentence in English because that appreciation of small improvements is what can build self-confidence and belief. By being successful we create an important motivator to keep trying at something. Writers like Matthew Syed (“Bounce”) and Malcolm Gladwell (“Outliers”) have shown without persistent and deliberate practice then success is very elusive in any profession or area of study. One of their examples is Japanese Olympic Figure Skater Shizuka Arakawa, who estimated that before winning her medal she had to endure falling 20 000 times on the ice or there’s David Beckham who was practicing free kicks for hours at a time from the age of four. Gladwell is quoted as saying “practice isn’t the thing you do once you’re good. It’s the thing you do that makes you good.” And encouraging all of our students to want to practice, is, in many ways vital to delivering those great results listed above.
So, spend a moment with your children discussing their successes. Every one of them will have something that is worth talking about and it is only by identifying them that we can build their confidence as young adults.

And finally, don’t forget appreciating your successes as parents. Each day you send to us young people who are keen to learn and fantastically well behaved. If you didn’t do that then making the school the success it is would prove considerably harder!