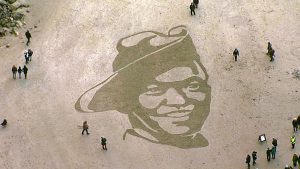 This year for the centenary memorial of the 1918 armistice, we were contacted by the town council to put together a team of students to work with local artist Sarah Butterworth and the ‘Activate team’ creating on behalf of director Danny Boyle, Lyme’s ‘Pages in the Sand’ image.

It involved three days work which included training to create a grid system via which we could transpose a very accurate image of Kulbir Thapa Magar VC, the first Gurkha recipient of the Victoria Cross onto the sand.

The team first learned to use the system three weeks before the event giving up the best part of their Saturday on the 27th October in ice cold, finger-numbing conditions. Two weeks later the day before the event we had our first attempt at the real thing after a thunderstorm had drenched the sand and the waves had left the beach full of boulders.

It seemed throughout the Saturday that it was very unlikely we have anything less than a wash out for the main event but the students worked relentlessly to make sure that if there was a break in the clouds the next day, we would be ready.

At 9.00 a.m. on the 11th Kyran Kinlan noticed that he was still in bed, as was Sarah Robertson and Kat Frost all of whom had vital roles in our small team of eight! Meanwhile, Sarah Butterworth was unloading all the gear and Gemma Bowditch, Magenta Strillozzi and Poppy Bailey were able to take in the sun in what turned out to be quite a still and beautiful day. The clouds quickly cleared and a rainbow set the tone whilst our missing students launched themselves out of bed and hit warp speed to get to the beach.

One hot chocolate later and we were all on the sand going through our roles as a small crowd gathered to see what we were up to. That crowd got bigger as we spent over an hour painstakingly putting out our grid only for Nicola from the Activate team monitoring the event from the gardens above to reach the correct conclusion that the sand was still too wet from the long forgotten thunderstorm and we would need to move the entire grid up the beach to guarantee success.

Lots of volunteers got stuck in to help which is perhaps the nicest part the story and with Sarah expertly guiding the students and a band of helpers moving each string one at a time we were back on track and ready to pull the image together. The activate team had volunteers who got the public to create lines of stencils along the beach whilst the freehand drawing of Kulbir began.

As the face started to emerge in the sand the BBC spotlight team interviewed the students and quizzed them about what they were learning. As I lazily leant on my drawing stick I could see exactly what these students were learning. They were doing something together that was tricky, needed focus and faith in each other. Despite never having the chance to see what their efforts actually looked like they showed belief in themselves and rode each setback without moaning. They were doing it to challenge themselves and complete something ambitious without reward. They were nice to each other and when it came to dividing up responsibilities they talked about each others strengths with a realism and kindness that meant each of them was put into their role by the group and not themselves. They were learning what it is to be a Woodroffe student, and just a student at Woodroffe.

I was very proud of them. Even if the picture had turned out looking like Barney from the Simpsons I would have been proud of them. Luckily for everyone… they nailed it.