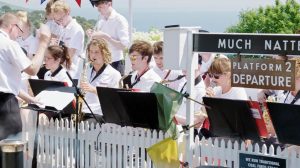 On the 28th June the school Big Band were invited to perform at Pecorama, Beer as part of the unveiling of a refurbished train which was renamed ‘Jools’ after the musician and TV presenter Jools Holland.

The band performed before the unveiling, which was done by Jools Holland himself and again as the train left the platform. A great performance in the heat was well received by the people who had gathered for the ceremony.

“The quality of music was fantastic, your team of musicians and helpers were terrific company, and we have received excellent feedback from visitors and our staff alike. The band members were an outstanding advert for both you as their leader and the Woodroffe School in general”

Well done to all who performed, a particular mention has to go to Zack Chantler who was playing solo saxophone as Jools Holland arrived – no pressure!

It was a great pleasure to see ex-students lead by Ed Mills who were filming the event. Their film can be viewed below.

Have a great summer.