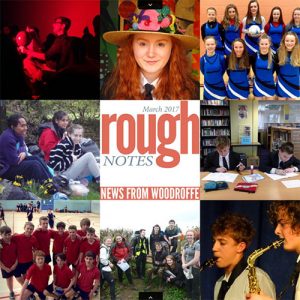 The last week of term before Easter is always incredibly busy but it is also one of those moments in the year when we are encouraged to stop and think about exactly how much goes on here.  The annual Spring Concert, when the Music department gets to showcase the talents of Woodroffe’s singers and musicians, is one of the highlights of the year. Around 150 students were involved this year, an amazing statistic given the national decline in participation in music, and, as ever, the performances were outstanding.

We also get the chance, at the Senior Awards Evening, to congratulate 150 students on their achievements this year, as well as recognising the work and contributions of many others who did not quite make the awards list.  It is also a pleasure to hear the Heads of Year read out the pen portraits of each student and to be reminded of the amazing things many of them do both in and out of school. It is also inspiring to hear about the planned destinations of Year 13 students who now hold offers to universities across the country.

The highlight of the week for me, however, is always the whole school assembly – and I mean the whole school.  Because of the cramped accommodation, our weekly, formal assemblies normally involve two or three year groups; once a year, however, we open up the Sports Hall and, thanks to some very careful organisation by Mr Rowe and Mr Shelley, we manage to get over a thousand students and 120 staff together – and this is really something to see. Very few secondary schools would dare to attempt such an event, mainly due to concerns over pupil behaviour, but behaviour is never a problem at Woodroffe.  The assembly gives students a chance to feel part of the whole school community and, occurring the day after Senior Awards, gives everybody the opportunity to listen to some of the music featured the previous evening.  Everyone returns to lessons genuinely inspired.  In particular, it gives Years 11, 12 and 13 a lift before they head off towards what will hopefully be some fairly intensive revision over the Easter holidays in preparation for the exam season which seems to begin earlier and earlier each year.

But that’s not all. Over the past few weeks, students have, as usual, been involved in a fantastic range of activities, many of which feature in this edition of Rough Notes. To give you a flavour, these have included: Careers Week; Science Week; a visit to the UCAS Convention; participation in the Model United Nations conference; the Sixth Form French Exchange; Red Nose Day; Life Drawing Classes;  a CCF Submarine visit;  the RSC Live production of The Tempest seen by Year 8; the play, Chelsea’s Choice; Ten Tors And DoE Training; and a trip to see Men in White for Year 9.

Finally, as if to make the point that life at Woodroffe is as much about academic success as extra-curricular participation, sixth form students who have been studying for the Extended Project Qualification, were asked to display their work and talk about it in an EPQ market place event which took place in the common room last week.  Students talked animatedly about their projects and, in most cases, demonstrated a wonderfully thorough grasp of their chosen research topics. Above all, it was their confidence and self-possession which was most impressive – these are sixth formers who are ready to go out with confidence into the world.

Have a great Easter.