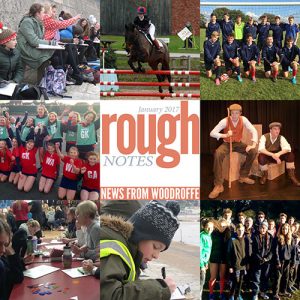 Happy New Year! We are only a few weeks into the New Year but already there is a lot to celebrate and quite a bit to be worried about. The positives, as ever, come from the things Woodroffe students have been doing; the negatives from the political world.

First, it’s time to celebrate. As you will no doubt be aware, the national school league tables were published by the Department for Education last week and it was pleasing to see Woodroffe once again featuring as one of the most successful schools in the county. Not only did we have one of the highest Progress 8 scores (this is the government’s new measure of pupil performance based on their progress in eight key GCSE subjects) at 0. 23 but, along with The Thomas Hardye School, we had the highest percentage of pupils achieving A*-C grades in both English and Maths, a remarkable 77%.

Sixth form performance was also outstanding: with an average points score of 30. 31, we were one of the highest performing sixth forms in the county. As if that isn’t impressive enough, the success of the sixth form was underscored by the fact that dozens of Year 13 students have recently received offers from some of the best universities in the country, including two students who have been offered places at Oxford.

In addition, I am delighted to announce that our funding as a National Maths Hub (one of only 32 in the country) has been confirmed for at least another two years as this will allow us to continue leading some of the most innovative work in Maths education anywhere in the UK. Our work as a Teaching School continues to flourish: this month we have been awarded significant sums of money to support two local schools, one secondary and one primary, and, several more schools in the region have asked to join our Teaching School Alliance. Perhaps the most exciting development is the award of an £8k DfE Research Grant which will allow us to compare the way teachers use data to improve performance with the way data is used by doctors and other medical staff, the aim being to help schools use data more efficiently and effectively. It is Woodroffe’s participation in activities such as these which makes the school such an attractive place to work and which allows us to continue employing first class teachers against a national background of teacher shortages.

While the school continues to flourish, it does so as the thunder clouds of financial gloom grow ever closer. So far, Woodroffe has weathered the storm and managed to present a balanced budget. Governors have been careful to ensure that we have always had a reasonable reserve to allow us to cope with one or two years of poor funding but recent political decisions mean that things are changing. There is no doubt that we are looking at a bleak financial future.

As one of the lowest funded secondary schools in one of the lowest funded local authorities in the country, we have been confident that the proposed Fair Funding Formula would work in our favour. How wrong we were. The transition arrangements published by the DfE suggest that we will benefit to the tune of 0. 02%. At the same time, the LA is to reduce our sixth form grant by over £25k, thus wiping out any potential rise in our income. In addition, The Schools Forum, the Dorset committee that allocates the education budget, is currently considering clawing back the money in our reserves to cover shortfalls in its high needs budget. If this happens, we will lose a substantial amount of our financial cushion and our prudent management of the budget over the last few years will have come to nothing.

Much more worrying is the NUT analysis of the Fair Funding Formula which suggests that by 2019, Woodroffe will lose over £300,000, equivalent to £362 per pupil. This would mean we would need to lose at least seven teachers to balance the books. This is, of course, a worst case scenario but it is clear that deep cuts are coming and we will soon be struggling to survive. The NUT urges parents to contact their MPs to express their concerns and I am sure parents, teachers and governors across the country are united in their condemnation of the extent of proposed financial cuts and the damage it will do to our schools. We can only hope that the formula is re-worked and that the outlook improves but we are bracing ourselves for the worst and making savings wherever we can. Our main concern, of course, will be to protect our students from the effects of the cuts.

So, a mixed picture this month: great success for the school; great uncertainty for the future.