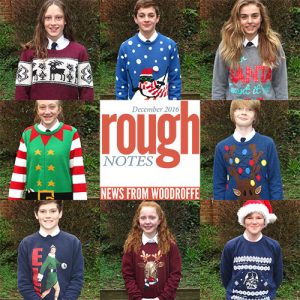 The last couple of weeks before Christmas are characterised by an interesting blend of excitement and exhaustion. Everyone is excited about Christmas, and I’m sure that includes all those who insist on their indifference to it (because deep down we all love Santa!), and yet at the same time, after the long autumn term, everyone is worn out. This must be especially true of Year 11 students who have had to endure two weeks of mock examinations, tackling papers that are now much harder than they have ever been before. The weather is miserable, teachers are doing their best not be ratty with one another, and there is no doubt that the smiling faces of the students are beginning to lose their radiance.

Exhausted or not, everyone gets involved and, as ever, here have been some great things happening recently. Those of you who came to the PTA’s Festive Event will know what a splendid evening it was. The combination of excellent music, interesting stalls, a hall full of food and drink, and lots of pleasant company made for a really enjoyable night out. As ever, the PTA did a fantastic job, especially as the whole thing was organised by a small but remarkably dedicated team of only four people.

Other end of term events have now become traditional at Woodroffe: the return of last year’s sixth formers to be presented with their examination certificates; the Carol Concert in St. Michael’s church; the Year 7 trip to the panto in Yeovil; the sixth form cinema outing; and the series of Christmas assemblies where, once again, music from the Big Band is the highlight. Nor should we forget Mr Brown’s stunning performance with a team of sixth formers in the Lyme Regis Christmas Pudding race.

Less festive but equally of note, this term saw the culmination of the Museum documentary and animation project with a ‘Film Premier’ evening involving staff from Lyme Regis Museum, members of the public who helped with or featured in the films, and students from both Woodroffe and our partner primary schools. The audience was treated first to an animation about the Bindon Landslip of 1839 made by Years 7 and 8 and then to an outstanding documentary created by sixth form Geography and Photography students. The documentary was so impressive it wouldn’t have looked out of place on the BBC and is now available on our website for those who missed it.

This brings us on to the website itself. I am delighted to announce the launch of a new Woodroffe School website which went live this week. If you haven’t seen it yet, take a look. Our Data Manager, Alex Goodrick, has done an amazing job designing and creating the new site in just a few weeks. It is not only visually impressive, it is much more user friendly than the old site and will allow us to update it much more regularly. It is also a much better showcase of the incredible range of activities that take place at Woodroffe.

Finally, as some of you will be aware, Mrs Wood, our Director of Arts, plans to retire at the end of this year. She has done – and continues to do! – a fantastic job for the school, including, for example, leading dozens of exciting extracurricular activities like the museum project described above. There will be lots more on Mrs Wood later in the year but the reason for noting it now is to introduce our new Assistant Headteacher, Miss Crabb. Whenever a member of staff leaves, we review our staffing structure and the needs of the school and with Mrs Wood’s departure we decided not to appoint another Director of Arts, as this was a post related primarily to Arts College Status, a designation which no longer exists, but to appoint an Assistant Head to strengthen the leadership team. Miss Crabb was part of an exceptionally strong field but convinced us that she has the enthusiasm and dedication to really add something to the team. We look forward to her taking up her new role next September but she has a few things to do with Year 11 first!

I hope you all have a very happy Christmas.